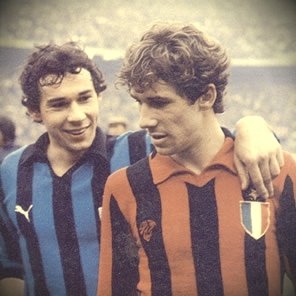 Welcome, over the last week I have been looking back at my collection of Italian Football matches on Video and DVD which as brought back some of the best memories I have about growing up watching the Italian game. I have decided to tell my story of how It all begun and how It developed over the years. It all started one winter’s evening in 1979 at home with my parents after a day at junior school and game of football after school with my mates which was common practice if we had not got a game for the school team. We lived and breathed the game I supported Nottingham Forest whilst a few of my mates supported Liverpool another supported Manchester City and another Sheffield Wednesday plus a good few who supported Derby County, one of the older lads supported Everton but we all had one thing in common we loved Football. At that time my club Nottingham Forest and Liverpool were going head to head both domestically and in Europe which gave us chance to have plenty of banter.

With both Forest and Liverpool competing in Europe it opened up a new avenue of Football to explore, who the hell are Borussia Monchengladbach and Grasshoppers? We would do our up most best to find out about this other World of Football and it wasn’t easy, we had no internet so surfing to us was skateboarding on the sea without the wheels, we had very little tv coverage apart from Harry Carpenter on the BBC (One of three television stations that we had) introducing the midweek European Football highlights on Sportsnight which also showed Boxing and Brian Moore on Itv which I think was called Midweek Sports Special who would show highlights from the European Cup, European Cup Winners Cup and UEFA Cup. We also would get the odd page with some news on the European and sometimes the World game (who are Boca Juniors and Flamengo?)  in the Football magazines we brought each week plus the radio which I still love to this day listening to a game on the radio were you visualise what the commentator is saying.

So back to the winter’s evening, my dad had got a satellite tv system which I was playing around with when suddenly I tune in to a station showing Football highlights the station was called Rai and it was showing the highlights from the weekends games so I sit and watch for the duration of the programme and remember this scoreline Inter 4-0 Juventus with a player called Altobelli scoring an hat-trick. I locked the channel in and became a regular viewer of the Hotbird satellite and the Rai channel highlight show, I was now in unknown territory and enjoying every minute of it.

The Christmas of 1979 my grandparents brought me a radio because they knew how much I loved listening to the Football on the radio. The radio was a PYE radio that had FM, AM, Short Wave and Long Wave bandwidths which at the time meant nothing to me until one Sunday afternoon I managed to accidentally come across a football match in a foreign language which I could not understand but the energy and enthusiasm in which the commentator was transmitting has stayed with me all of my life and then I heard a familiar name Altobelli, Altobelli, Altobelli, I was listening to Italian Football however I did not know the result at the end of the game but I knew that watching Rai I would see the result of the Napoli v Inter game which I did Inter had won 4-3 sure enough Altobelli scored well yes of course he did he scored on the radio. Inter were top of the table but it was the club in 2nd place who had taken my eye playing in Red and Black striped shirts and white shorts, Milan,  Inters city rivals and it was Inter who went on to become Champions by the end of the season with Milan finishing 3rd behind a team called Juventus.

Milan were relegated after being involved in the Totonero match fixing scandal and some chap from Juventus who was on loan at Perugia and scoring for fun was given a two year ban, his name Paulo Rossi which meant nothing to me at the time but would become synonymous with glory just two years later.

After watching around half a season of highlights and listening to my radio I was now following the Italian game with a passion and slowly becoming used to the names in the Italian game so much so that by the time the squads were named for the 1980 European Championship which was to be held in Italy I could tell my mates about who England would face in the Stadio Comunale the home of both Juventus and Torino in Turin.

Italy beat England on the night by a single Tardelli goal and this was my first experience of watching England play and feeling more in tune with their Italian counterparts a feeling which grew stronger and stronger the more I delved in to the World of Calcio. In all honesty the Euro 80 tournament was unspectacular however I would race home from school to my grandparents to have tea and settle down to watch the matches. I was enjoying my first International tournament on the back of my club side winning the European Cup for the 2nd time in a row. I was wide eyed in watching the tough defensive performances of Claudio Gentile and the sublime skill of Gaetano Scirea at the heart of the Italian defence.  The Italian side finished the tournament in 4th place but for me it was a chance to watch my new found players four times during the tournament  and the first of many cheering on the Azzurri.

Thank you for reading and I hope you will return soon to read Part Two of Innamorasi my story of falling in love with the World of Calcio.