Welcome to the 2nd post from our 2019-2020 season. A quick recap for anyone visiting this blog for the first time, I took over at Fiorentina in the summer of 2018 on an initial 1 year contract with the boards expectations of finishing in the top half of the table and my own expectation of European qualification. The Media prediction was that we would finish 7th. My initial thoughts was that I would work with the players already at the club during the first season before making any big changes to both the playing staff and the backroom staff.

I decided to sign three young players with the first one being Alessandro Cortinovis from Atalanta who would join us straight away and go in to our Under 20 squad followed by Sandro Tonali from Brescia who would remain at Brescia on loan for the season and finally Simone Mazzocchi another player from Atalanta who again would stay on loan for the season.

We had a very good season finishing 3rd in the table thus qualifying for the Champions League exceeding the boards expectations and picking up the Manager of the year award along the way and a two and a half year contract extension.

Fast forward to the current season 2019-2020 and a summer of change with some 60 odd players leaving the club through transfer or being released with the biggest mover being Giovanni Simeone who joined Paris Saint Germain. I made a move in to the market bringing in Patrick Cutrone, Maximilliano Romero and Domenico Berardi. The boards expectations for the season are that we gain European qualification from our league position.

We had a steady start to the season that saw us sitting in 7th place in the table after our first twelve league games with Patrick Cutrone having an excellent start replacing Giovanni Simeone leading our frontline netting 13 goals in all competitions.

We were sat in 2nd place in the Champions League table with two games to go.

Matchday 13 at home to Sassuolo saw in form forward Patrick Cutrone net a brace in a 2-1 win which was a delight to watch thanks to an impressive display from winger Rafik Zekhnini who is really grabbing his chance in the first team after injury keeps Domenico Berardi in the physio room.

The visit of FC Porto to the Franchi in midweek turns out to be an even game with the group leaders holding us to a 0-0 draw that drops us down to third place in the group after Lyon also beat Lokomotiv Moscow meaning it’s going to be tight going in to the the final Champions League Matchday.

Back to Serie A action and another three points this time a 3-1 win at Sampdoria coming courtesy of Cutrone, Chiesa and a Berardi penalty. We followed this up with a 2-0 win against Udinese with Rafik Zekhnini getting on the scoresheet along with an own goal from Castagne in time added on.

A 3-1 win in our final Champions League group stage against Lokomotiv Moscow was not enough to qualify for the knockout rounds after we finished 3rd in a 3 way tie on 11 points with both Porto and Lyon. Both our central defenders Nikola Milenković and Germain Pezzella 2 got our goals. So we go in to the Europa League knockout rounds and have drawn German club Wolfsburg.

Matchday 16 took us away to SPAL were we recorded a 4-1 victory with goals from Milenković 2, Cutrone and Tonali to extend our unbeaten run in all competitions to 6 matches.

It was now time for Coppa Italia action against Albinoleffe at the Franchi and I decided to rotate the whole starting line up to give some game time to our squad players or bench warmers. We came through the tie winning 2-1 with goals from Valentin Eysseric and Maximiliano Romero to set up a quarter final against Atalanta.

A big test next when Internazionale visited Florence for Matchday 17 of our Serie A campaign and it was the visitors who went in to an early lead but we are playing with confidence and when Patrick Cutrone levelled the game just before the half hour mark it was nothing more than we deserved. The second period failed to produce a goal so a 1-1 draw and a share of the points before our our trip to Turin. 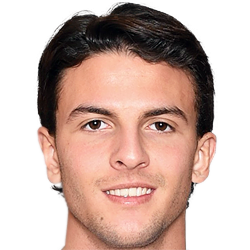 A Thursday night clash against Juventus in their own backyard is never going to be an easy game but the Old Lady are not performing well this season and I felt pre game that we could get something out of this fixture and I was not wrong. After a goalless first half we went out and dominated the second period thanks to a five star performance from winger Rafik Zekhnini who was terrorising the Juve backline and it was the Norwegian who opened the scoring in the 70th minute with a superb solo goal. The young winger is really turning on the style this season and from goalscorer to creator he tees up Jordan Veretout who seals the victory with a strike from 10 yards with 5 minutes remaining on the clock. A solid 2-0 win puts us in 2nd place in the table behind Milan that gives the media something to write about and send the Viola tifosi home happy and for the first time under my watch a victory over our arch enemy. 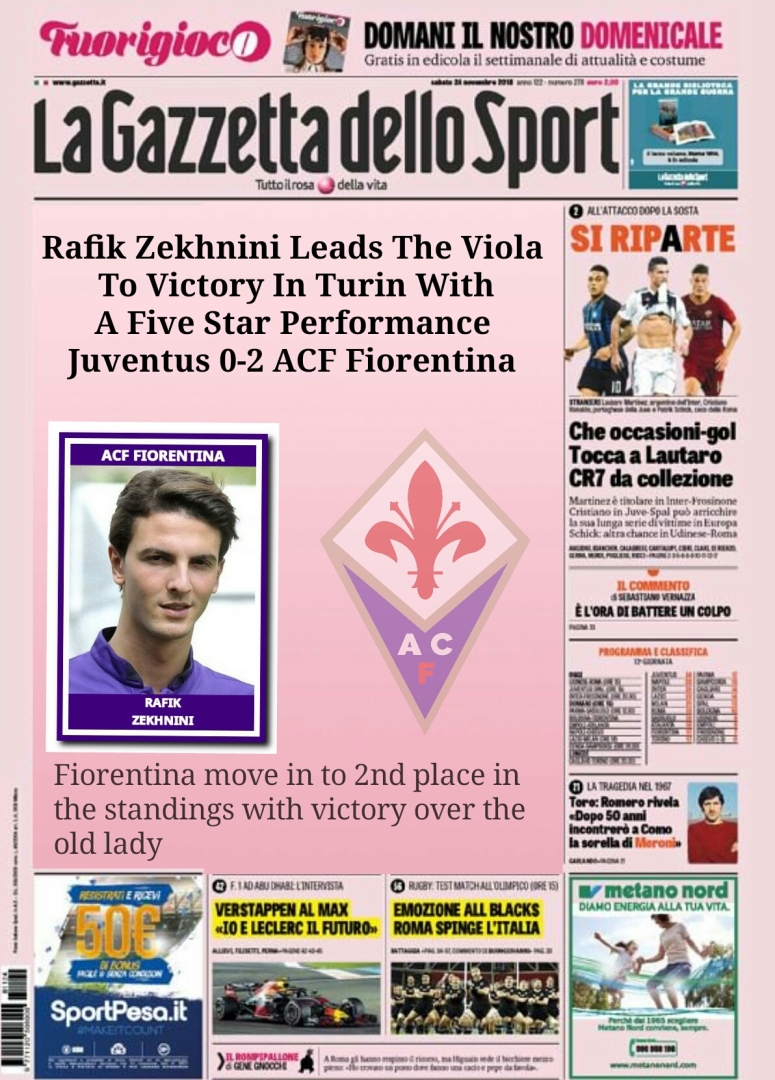 With confidence at an high we return to Florence with the belief that we are genuine title contenders and I can see that my trust in bringing in the youth players over some of the more experienced Viola is paying dividends.  Since taking over the reigns in Florence Abdou Diakhate, Rafik Zekhnini, Sandro Tonali and Riccardo Sottil have all been given the opportunity to stake a starting place and they have taken it and shown the Italian media that they are the real deal.

We beat Frosinone in our next league game by a single Patrick Cutrone goal to extend our unbeaten run to twelve games ahead of the Coppa Italia Quarter Final game in Bergamo against Atalanta and another chance for the squad players to stake a claim for first team football. Maximiliano Romero netted a first half brace to give us a 2-0 victory that sets up a Semi Final against Internazionale in the New Year.

With a two week or so winter break upon us it was time for the transfer window to open and it did not take long for a bid to come in from Milan for Federico Chiesa for around £21m rising to £42m with add ons which I rejected straight away. I have said before I won’t stand in the way of any player who wants to leave the club but whilst Chiesa is interested in talking to Milan if another bid comes in he is not having a tantrum over it, I didn’t feel the need to bring anyone in to the club during the window.

Vincent Laurini is out of contract at the end of the season and I have decided to let let him go so he is free talk to any clubs interested.

Matchday 20 and a Germain Pezzella was enough to take all three points in a 1-0 win at home to Roma which puts us on top of the league for the first time in 18 months. A frustrating 2-2 draw followed away at struggling Lecce with Domenico Berardi and Vitor Hugo getting on the scoresheet.

We got back to winning ways when Cagliari visited Florence on Matchday 22 with a 4-1 victory that included goals from Pezzella, Cutrone, Zekhnini and Diakhate that keeps us in top spot in the table, three points ahead of Napoli. 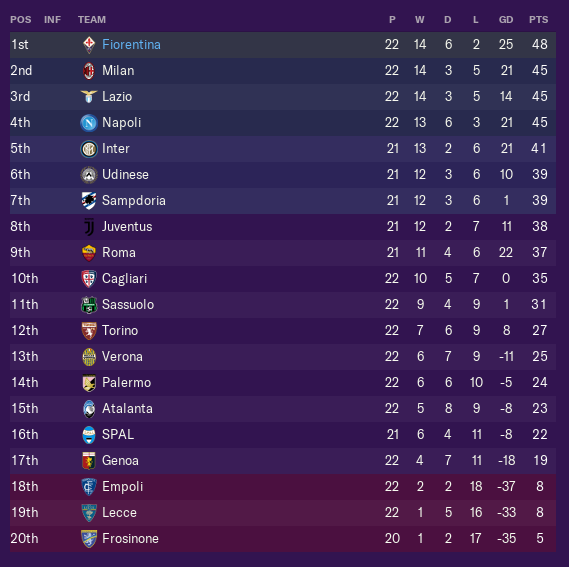 We are playing well and deserve to be leading the standings after 22 games played. Patrick Cutrone is settling in to the Florence lifestyle scoring 20 times in 27 appearances. As Sandro Tonali and Abdou Diakhate are the top picks in midfield with the former getting a good number of Serie A  player of the month awards but my player of the season so far is Rafik Zekhnini who came in to the starting line up after Domenico Berardi picked up an injury. The Norwegian winger with 3 goals and 12 assists looks comfortable in the system and taking the opportunity to shine in Serie A.  The most consistent performer according to the match ratings is Central Defender Germain Pezzella who leads our backline really well and with 5 goals is a threat in the air from a set piece. Maximiliano Romera also deserves a mention, understudy to Cutrone the Argentine Forward has contributed 6 important goals when called upon and looks a threat when leading the line, it’s never easy for a Forward when being used mostly as a substitute to gain consistency but Romero is coming along nicely.

After months of uncertainty Federico Chiesa has signed a new contract giving the whole club a boost after Milan had put a bid in for the winger. Abdou Diakhate was also delighted to sign a contract extension commiting is future to the Viola.

We have a very exciting few months ahead of us with us still competing in 3 competitions,  Serie A, Europa League and the Coppa Italia. My main target would be to win the Serie A title out of the three competitions which would be earlier than I anticipated but it would be a fantastic feeling if we could get our hands on the league title. The Coppa Italia Semi Final against Internazionale over two legs should be an interesting match up with our squad players getting the opportunity to show what they can do and then we have a Europa League showdown with Wolfsburg coming up so the season is about to get very interesting. 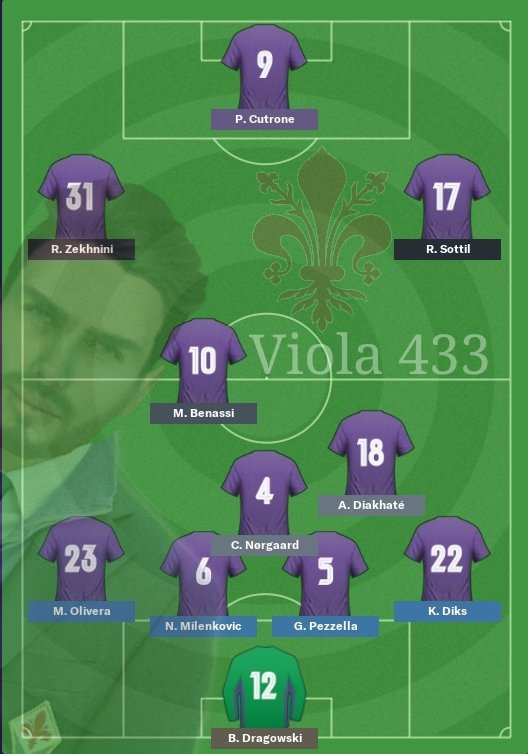 I love the tactical side of the game and spend a lot of time developing a system and get a great amount of pleasure from watching a system evolve. I have said on many occasions that my tactical systems are not plug and play, ok there is always a chance that it could work with somebody’s team but others it could just be an absolute car crash. I do get asked on occasions by people for me to send them my tacticx and at times I have sent them and after a few games I get messages either saying that the system is working well or the system is a load of shite!!!! and yes it might very well be a load of shite but after all it was built specifically for my team and not to break the game.

I have no problem with people downloading tactics after all we all play ths game how we wish and as long as you are enjoying the game that’s the main thing.

Myself I like to build my own system and get enjoyment that way and FM19 is no different I started out with a vision and have developed and still developing my Viola 433 system (The Iron Triangle) which I have decided to write about. It’s a system developed and inspired by Osvaldo Bagnoli and his Hellas Verona side who won the Serie A title in the 1984-1985 season.

I look forward to sharing how I have built the Iron Triangle so look out for this in the future, so until next time thanks for reading.