Welcome to my latest blog post covering my save with Celta de Vigo. In this blog post I just wanted to cover how I approach Player Development. I am not here to say that this is the best way to do it, it’s just how I approach it and how I have implemented it in Galicia, here is an overview of The Galician Way.

Player Development is if not already a must in Football unless you want to keep haemorrhaging money on transfer fees. The supporter’s of most Football Clubs will tell you that there is nothing more satisfying than seeing a kid who has come through the Youth Academy come in to the first team and do well. I think I am correct in saying that most people in the FM World feel the same when they develop a player who makes the grade.

The above 3 development aims can cover a lot of clubs around the World and when we think of the clubs who’s emphasis is to develop players we immediately think of the following examples : Ajax, Athletic Club, Genk, FC Barcelona and Atalanta. There are many more at all levels and the aforementioned clubs are just an handful.

At Celta de Vigo I have a style of Football that I want to play by using two formations 4-2-3-1 and 4-4-2 playing an attacking possession based style. This fits in with the clubs culture so it makes things easy on that front. So with this in mind I decided that after analysing the three squads (Celta 1st team, Celta B and Celta U19’s) that I would look to build a Development system during the duration of our first season. I sat down and looked at every player that we had on our books and set about putting a plan in place that would see the club reduce the amount of players on its books over the first two seasons. I had decided that the clubs development system be overhauled to allow us to:

Rome was not built in a day the saying goes so we will look to keep improving the 6 categories above until we have the best of the best and keep improving.

Next on the agenda is to look at our Affiliate clubs and look to try and identify a club or clubs who we could send players on loan too gain valuable 1st team game time. All our loans out of the club will have an option to recall and must have an agreed playing time in place and if possible the role that they will be playing. It’s no use to us if we have one of our players sat on the bench at an affiliate club.

When selecting a new Affiliate the clubs staff and facilities will be taken in to account along with the clubs playing style and level of competition.

I want our squad sizes to be trimmed down to allow game time to an higher number of players. It is important that whatever squad a player is in that game time is vital in the development of that player alongside his training programme.

Players will come in to the club via our Scouting Network who will be integral to identifying talent with a focus on youth early enough for us to be able to recruit at the earliest possible time that means:

The Scouting Network will focus on youth building a database of players who will be shortlisted as potential players to join the club with a preference for Spanish players however we will have a presence in South America and Mexico.

I am also very keen on recruitment of Galician born players so I am currently building filters on searching players from the Galician region starting with the Cities Vigo, Santiago de Compostela, Pontevedra, Ourense, Lugo, Ferrol and A Coruña and filtering down to the towns and villages. I feel that recruiting Galician Born players only along with 17 year old Spanish players could really add something to the save and give us our very own policy like Athletic Club’s Basque only policy.

■ The Galician Policy will take effect immediately meaning that from the next transfer window in the save which is January 2021 any player born outside the Galician region must be no older than 17 years of age.

Players will also enter the Galician Way via our Youth Intake with our Head Of Youth Development having a Professional attitude with high attributes in judging player ability, player potential ability and working with youngsters. I also look for a HOYD who’s favoured formation and style of football match my own.

I think one of the most overlooked areas in Youth Development is your feeder clubs. I recommend keeping an eye on the players in your feeder clubs because you just might find a gem of a player who can be of value to your club. I am always on at the board for getting more feeder clubs you just never know who you might find by extending your network.

All of the aforementioned are the foundations that I put in place and consistently strive to improve which I have broken down below in to two stages.

Let’s have a look at how The Galician Way is applied :

■ A player comes in to the club via the scouting network or the youth intake day.

The player will go straight in to the Under 19 squad on a youth contract to start their development and will have their training schedule set out by the Youth team coaches who should be the very best that you can attract to the club and ideally share your tactical philosophy.  Individual training will be set by myself because I want to mould players in to specialist positions and roles.

The Player will be constantly analysed throughout their development and offered a professional contract at the point that along with my backroom staff that I think this player can be an asset to the club irrelevant of their star rating this is because I have found that even somebody with an early low star rating can still be turned in to a decent player.

I am going to show you a selection of players of different star potential and different positions so that we can follow their development using The Galician Way.

Young Vela at 17 years old will spend the next six months minimum in the Under 19 squad. He is a possible 2 star potential player but I am going to have a go at developing him in to a player that can play a a part in the clubs future. 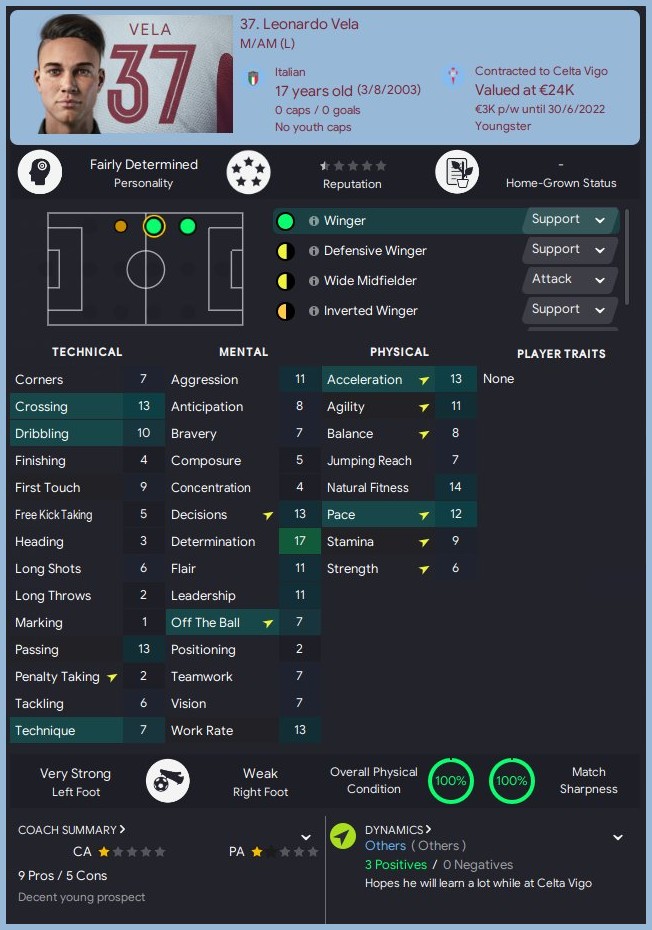 16 year old Pallarés looks a decent prospect and the 2nd player that we will track during his development. 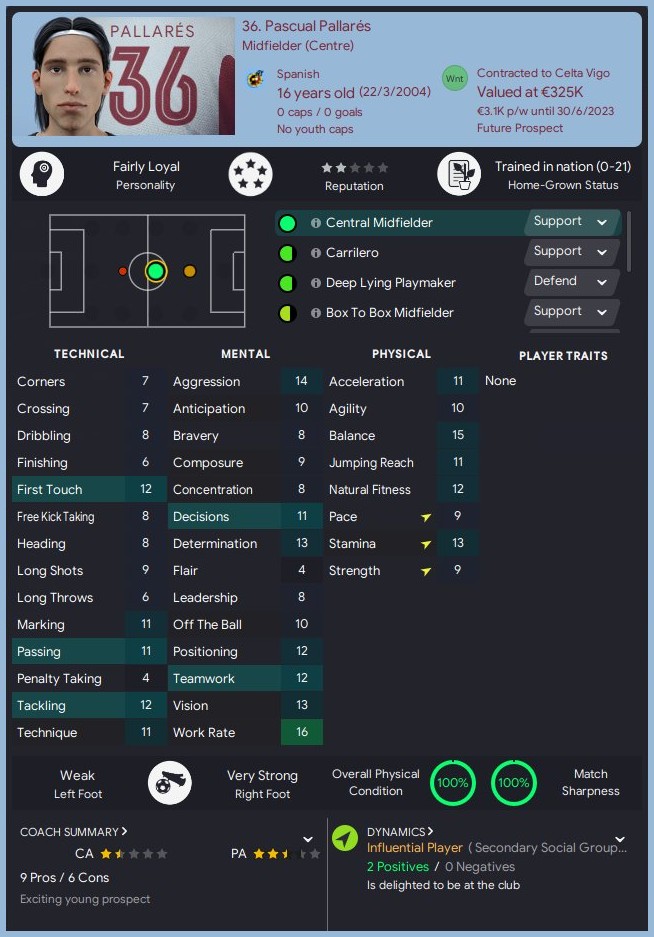 16 year old Central Defender Juan an exciting young prospect is player 3 who we will follow.

18 year old Gabri is now in our Celta B squad and in addition being trained in a Central Midfield role. He is player 4 that we will follow.

17 year old Full Back who at the end of our current season will be another who will go in to our B team. 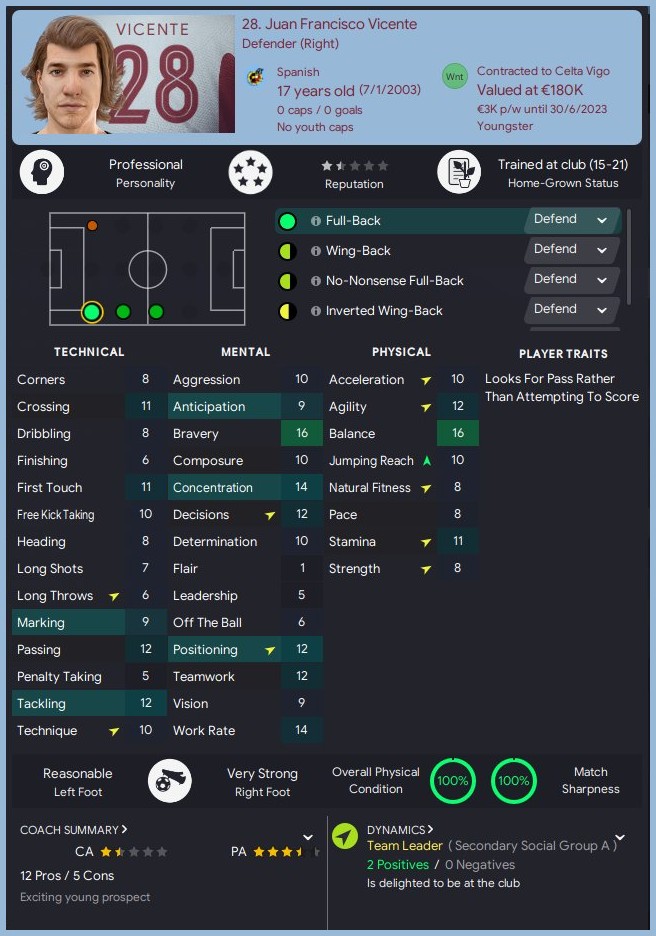 16 year old Goalkeeper who looks an exciting talent will be the 6th player who we will be following through his development. 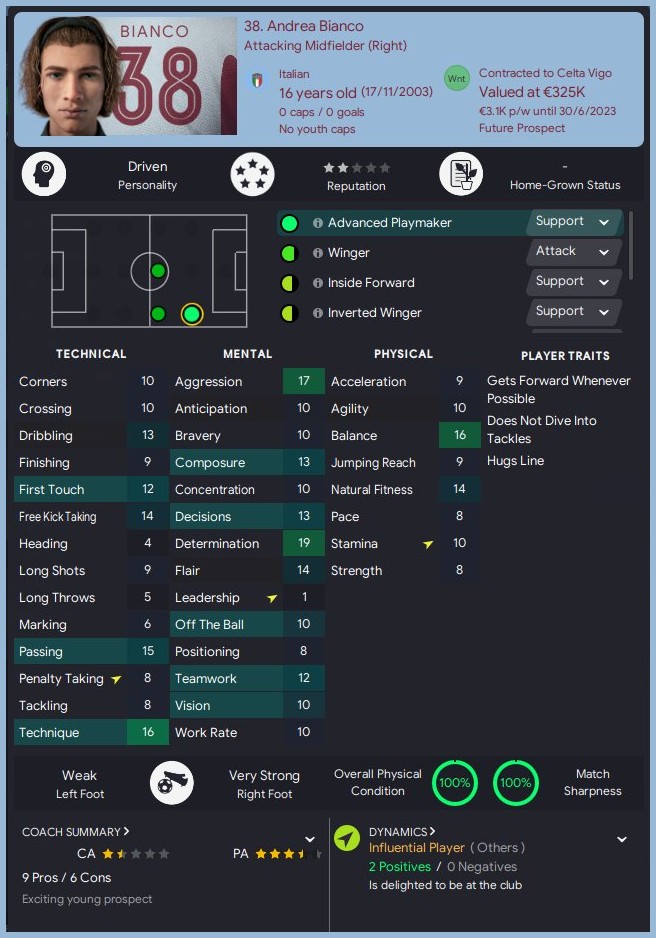 16 year old Garcia looks like he could be a leading player in the future at Celta.

Already looking like a beast of a player Mikel Exposito will move in to the B team when he turns 17.

16 year old Iriondo is training in the Advanced Forward role and looks another who could have a big future in front of him. Like Expósito above he will go straight in to the B team once he turns 17.

The above 10 players will be the initial ones who we will follow closely for this player development series but I will also add new players that come in to the club.

I will always look at a player and decide whether they can be retrained and moulded in to a different position / role.

Once a player turns 17 I will look to either give them another 6 months within the youth team or move them in to the B team.

Each of our squads play a big part in The Galician Way and Celta B can play a big part in our player development but we have to have our B team playing at the highest level possible which is the Segunda Division the 2nd tier of Spanish Football. Currently Celta B are playing in the Segunda B level so we are pulling all the stops out to gain promotion and then keep them there.

Once a player reaches 17 to 18 years I want them to be be in the B team which will then expose them to an higher level of football to aid their development.

Like the Under 19 squad I am responsible for each players Individual training and decide if the player will stay in the B team or go out on loan to a club playing at a decent level who have good facilities and a good coaching team. I am currently reviewing our affiliates and hope to announce a new club in the near future.

Can we create a Golden Generation of players who go on to great things with Celta ?

Mentoring players is another cog in the development of our players which could see us hold on to a couple of players who have been at the club a long time and who are professional in their attitude. You will notice that any player who comes in to the club portrays a very good attitude.

Even if I decide that a player may not be good enough for the 1st team squad he could still remain at the club and play in our B team squad if he is good enough for that level to help both keep the B team playing at the highest level and also to aid the development of our U19’s who transition in to the B team.

Once I see that a player is ready to become part of the 1st team set up they will be promoted in to the 1st team squad and given the opportunity to stake a place in our starting line up. I may even loan a player out to get more game time under their belt before they become a regular starter or rotation player.

We can never rule out having to sell a player, with the release clause in a players contract every player has a price and the bigger clubs can also turn a players head and if this happens we just move on and continue trying to develop players successfully using the Galician Way system.

Please note by no means am I trying to say that this is the best way to develop your players and that even with everything in place it’s not a guarantee of creating and attracting players to the club but it is interesting and I am enjoying it a lot.

I will keep the Player Development series starting with this one updated so that we can see if the system is working.

The Rest Of Our Under 19 Squad

(Slideshow) if the slideshow does not automatically work on your device side swipe to see the next player.

Thank you for taking the time to take a look at my blog and thank you to all who are interacting about the save with me. I am really enjoying the interaction and the save itself. The added Galician rule gives the save another direction which I am enjoying and something that I will undoubtedly add to my future saves wherever they may be.